In the wild, many species have learnt to live together. A good example of an organized balance is the firebug and the linden tree, living together and doing each other favours.

Insects and plants that aim at living in reasonable balance develop a way to do it, offered by nature, which is named « dependence ». It is the necessity to do each other favours in order to maintain a life with reasonable quantity conditions, in an implicit agreement of giving and receiving sustainably, if no one come to disturb this order.

In another article, we gave the example of the hazelnut weevil, the favourite guest of the plant rather than its enemy, which can make us understand how these lives are organized, all associated with the biotic community.

Today, in a similar state of mind, let’s talk about the firebug, an insect which gathers in clusters with its companions under linden trees often located on schoolyards for their shade as well as in the parks and gardens of the Aube department where they are very pleasant.

Acknowledged virtues since the 17th century

This impressive hardwood, with its numerous virtues, can live up to a thousand years and was respected as a sacred tree by ancient Germanic civilizations.

It is the favourite tree of the beekeepers because of its very fragrant flowers attracting bees that forage their pollen and transform them into a very appreciated honey, and the favourite of the firebugs.

Actually, in the 17th century, a royal ordinance was issued, recommending the plantation of linden trees by the roads so the harvest of its inflorescences (with their calming and antispasmodic properties) would be easily done for the needs of hospitals.

As soon as the first rays of sunshine appear, numb firebugs can be seen going out from under the bark.

They have spent the winter there, hiding, clumped together for protection, fasting.

As soon as the first rays of sunshine appear, the firebugs go out to sunbath on the linden tree bark and remain clumped together.

They form a society, brought together by the production of pheromone, a characteristic scent of the species, but they do not have a social organization.

The pyrrhocoris apterus (Linné 1758), in Latin « wingless firebug », is a cold-blooded thermophilic insect that does not emit any revulsive smell unlike bugs in its family

It is of an oval shape, 1 cm long, it does not fly but move nimbly. It mates head to tail, the female, larger, pulling the male for several hours.

The insect digs a crack in the ground and then lays a hundred eggs. From these emerge pale pink juveniles, which are often the prey of birds and lizards.

It is polyphagous and mainly feed on linden tree seeds, which it pricks with its hollow rostrum and empties by sucking out their contents.

Therefore, it is dependent on this tree and « spend its life by the one that provides it with shelter and food ». This way, it also prevents the tree from over developing by eliminating some of its seeds.

It is a great example of the dependence between animal and plant lives, of an organized balance, but also of an extreme vulnerability face to the many dangers in nature.

It eats aphids and corpses of its own species, so it is a natural insecticide and decomposer of organic waste « that we must protect ».

Totally harmless, it is attractive to children with its vivid colours and its elytra covered of red and black shapes, looking like an african mask, easy to copy to make a carnival costume.

We all need to respect these familiar firebugs as they are indispensable elements for our ecosystems balance. 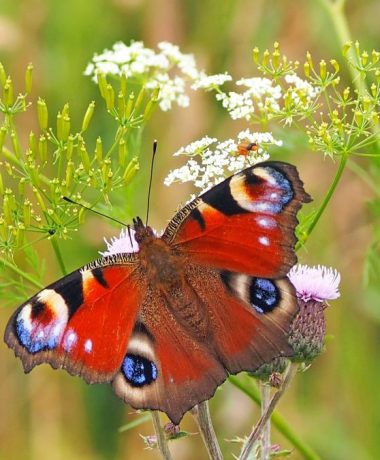