Troyes is proud of being the birthplace of people who became famous later on. One of them is Jacques Pantaléon, best known as Urbain IV, who became Pope!

Jacques Pantaléon was born in a cobblers family of Troyes at the end of the 12th century. He studied first in his home town before continuing at the University of Paris where he was known as Jacques of Troyes.

Jacques Pantaléon was canon of Langres cathedral, then archdeacon of Liège, chaplain and treasurer of  the Vatican, archdeacon of Laon, bishop of Verdun, pontifical legate in Poland and Silesia, Patriarch of Jerusalem, until he became Pope in 1261 even if he was not a cardinal!

He chose the name of Urbain IV to give a tribute to Urbain 1st, Saint and Pope of the 3rd century, and because he was elected on Saint Urbain’s day.

During his pontificate, Urbain IV did not forget his city since he sent money to a few religious organizations of the tricasse city. Above all, he decided to build a church on the exact place of his father’s old shop.

This church is a masterpiece of the Gothic style. It was built from 1262, but the construction took several centuries because, among other things, of conflicts with the Notre-Dame-aux-Nonnains Abbey but also because a few changes were decided regarding to the function of the building: the religious building was, indeed, transformed into a grain silo and then into a food distribution store during the Revolution!

Now, let’s talk about Pope Urbain IV again: he never came back to Troyes during his pontificate. He died in Pérouse on October 2, 1264, and for some, his death would have been predicted by a comet.

Urbain IV expressed the wish to be buried in the church he had decided to build in Troyes, but his wish was not fulfilled until late. Indeed, he was first buried in Pérouse, and his remains were not brought back to Troyes until 1935! And it was only in 1964, for the 700th anniversary of the Corpus Christi, that the church was consecrated as a basilica and dedicated to Saint Urbain. 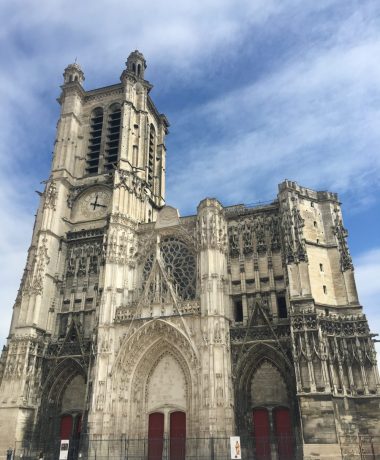